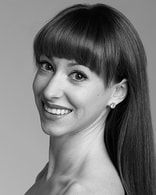 Erin began training at the young age of four, under the watchful eye of Dolores Kirkwood at Kirkwood Academy in New Westminster.  She joined Royal City Youth Ballet Company where she performed and toured many ballets including The Nutcracker, Cinderella, and Coppelia.  She also had the pleasure of performing in Royal City Musical Theatre Company's productions of Hello, Dolly! and Gypsy as a chorus girl and dancer.
In 2003, Erin joined Pacific DanceArts in Vancouver and was soon after accepted into the pre-professional division under the direction of Li Yaming. There she had the opportunity to perform both neo-classical and classical work including Swan Lake; Grand Pas de Deuxs from Le Corsaire, The Nutcracker, Raymonda and La Bayadere; as well as original choreography.  In 2009, she competed in the Youth America Grand Prix Finals in NYC.  Upon graduating, Erin moved to Atlanta, Georgia, to dance professionally with Atlanta Ballet, directed by John McFall and Sharon Story.  While at Atlanta Ballet, she performed and gained exposure to many different styes and repertoire including Michael Pink's Dracula, David Bintley's Carmina Burana, James Kudelka's Four Seasons and Christopher Wheeldon's RUSH, as well as practicing Gaga technique for Ohad Naharin's Minus 16.  She also worked with NYCB's Troy Schumacher on original work, George Balanchine's Who Cares?, and Christopher Hampson as the lead in his piece Silhouette.  Erin also performed leading roles in Atlanta Ballet's productions of Cinderella and Snow White.
In May 2014, Erin appeared as a guest artist in Irene Schnider's production of Coppelia performed by Coastal City Ballet.  And in June of that same year, she was one of twenty-two dancers invited from around the world to attend the Ballet Program at The School of Jacob's Pillow.  There she performed in the season opening Gala in a new work choreographed by the award winning Choreographer Jessica Lang.  Under program Director Anna-Marie Holmes, Erin worked with a faculty of choreographers, artists, and directors, including Dinna Bjorn, Adam Sklute, Madeleine Onne, and Maxim Beloserkovky.
During her season with Coastal City Ballet, Erin performed the lead role in the season opener of Don Quixote as Dulcinea in “Dream Scene”, lead soloist in a new work by Wen Wei Wang and was honoured to be cast as Cinderella in Ms. Schnider’s production of Cinderella, one of her favourite roles.
In October 2015, Erin travelled to Ireland to join Cork City Ballet as a Soloist. There she performed Yury Demakov's Swan Lake under the direction of Alan Foley in the Cork Opera House. And in June of 2016, Erin joined the prestigious English National Ballet under the direction of Tamara Rojo CBE to perform Derek Dean’s Swan Lake in the Round, in the world famous Royal Albert Hall in London. Also with ENB she performed in George Williamson's My First Sleeping Beauty.
In 2016 Erin joined Ballet Theatre UK as a Principal dancer and has performed and toured several lead roles such as Juliet in Romeo and Juliet which was a new creation and successfully reviewed in Dancing Times, the Queen of Hearts in Alice in Wonderland, The Sugarplum Fairy in the Nutcracker, Titania in A Midsummer Nights Dream, and the Little Mermaid in Christopher Moore’s The Little Mermaid. As well as performing a selection of feature roles in the 10 year Anniversary Gala of the company where she was again highly praised for her work in the August 2018 edition of Dancing Times UK. 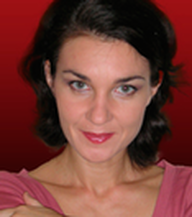 Born in Shumen, Bulgaria, Yana Dragieva has studied classical ballet in the Vagganova system since the age of six. She graduated from Sofia National Music and Dance University Choreographic department in 1996 in the class of prima ballerina Kalina Bogoeva. She continued her professional development with famous Masters such as Tadeusz Matacz and Alexander Ursuljiak from John Cranko School, Loippa Aroijo from Cuba National Ballet School, Seriozna Petrosjan in Erevan and Master Daniel Sallier in Montreal. Her mentor in her teaching career was Alexander Ursuljak, former director of Stuttgart Ballet School.Yana's professional dancing career started in Varna's State Opera house and continued later at State Music Theatre, Sofia. During this period she toured and later lived and performed in Wiesbaden, Germany, Finland, Norway and France. Yana has a Bachelor Degree from Bulgarian National Music University in Dance. She specialized in Classical Ballet Pedagogy Vaganova system, Choreographing and Rehearsing. 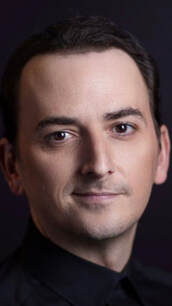 Patrick  was born in New Orleans, Louisiana. He started his dance training at age 15 at the Giacobbe Academy of Dance. At age 18, he was offered a full scholarship to train at Pennsylvania Ballet’s Rock School for Dance Education. After two years there, he trained at the School of American Ballet in New York City on full scholarship, where he also appeared in the feature film "Center Stage." Howell started his professional career at BalletMet Columbus, where he danced many leading roles including Laertes in Hamlet, Benvolio in Romeo & Juliet, Puck in A Midsummer Night’s Dream, Jonathan Harker and Renfield in Dracula, among others. From 2004-07, Howell danced as a soloist with the United Kingdom's Northern Ballet Theatre, where he performed roles including the title role in Peter Pan, Gypsy pas de deux in La Traviata and the final role before his departure, D’Artagnan in the critically-acclaimed Three Musketeers, a role Artistic Director David Nixon created on him. While dancing in England, Howell was named dancer of the month in Dancing Times magazine. He also traveled throughout Germany and France dancing in Don Quixote and served as a staff member to the Blue Lakes Fine Arts Camp. In 2008, Howell joined Milwaukee Ballet as a Leading Artist, where he performed numerous principal and soloist roles. His personal favorites were the title role in Stephen Mills’ Hamlet, Frolo in Michael Pink’s The Hunchback of Notre Dame and Captain Hook in Michael Pink’s Peter Pan. In 2011, Howell took a three-year leave from Milwaukee Ballet to work with Theatre Augsburg in Germany, where he worked with various choreographers including William Forseyth, Christian Spuck, Itzik Gilili, Edward Clug, Demis Volpi, Douglas Lee, Maurice Causey, Annabelle Lopez ocha, Young Soon Hue and Kevin O’Day among others. He had many works created for him including The Prince in Cinderella choreographed by previous Genesis winner Mauro De Candia. In 2012, Howell won the prestigious Theatre prize for this role in William Forseyth’s Herman Scherman. Howell also performed alongside some of Europe’s greatest dancers in galas and dance festivals throughout Germany, Turkey and Serbia. Milwaukee Ballet’s Michael Pink joined Howell in Augsburg to create the title role in his celebrated new production of Dorian Gray on him. In 2014, he returned to Milwaukee Ballet, where he reprised his role of Dorian Gray in 2016. Howell has also danced in Mark Godden’s Angels in the Architecture, Michael Pink’s Mirror Mirror, the Sheikh in Scheherazade, Beast in Beauty and the Beast, the title role in Dracula, the pas de deux of Val Caniparoli's Lambarena and as Rodolfo in La Bohème, where he performed alongside his wife Nicole Teague-Howell. In 2017 Patrick expanded his career to include teaching. He became a faculty member with the Milwaukee Ballet School and Academy as well as a teacher in the internationally attended Milwaukee Ballet Summer Training Program. He was a part of the national audition tour for this program. His teaching experience includes students as young as twelve years old through to pre-professionals. He has also taught company class for Milwaukee Ballet and Theatre Augsburg. 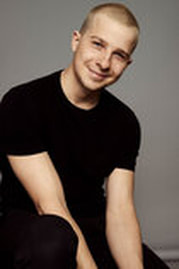 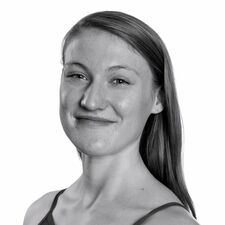 ​Born in England, Katherine moved to Canada as a young child, where her dance journey began at the age of three. Katherine grew up moving often, which gave her the opportunity to train in a variety of ballet and contemporary styles across Turkey, Japan, Canada and Norway. In 2015, Katherine moved to Vancouver to pursue her Bachelor of Arts at the University of British Columbia. It is then that she also joined Pacific DanceArts as a student, enrolling in the Half Day Program from 2017-21. Katherine attended Canada's Ballet Jörgen's summer intensive and Junior Company in 2019, and was invited to CBJ's Junior Company in both 2020 and 2021. Since moving to Vancouver, PDA has become Katherine's second home, and she is excited to share her love of dance here and to inspire the next generation of dancers to dream big.

Originally from Vancouver, B.C., Canada, is a dancer, teacher, and choreographer based in Seattle, WA. An alumna of the Alvin Ailey/Fordham University B.F.A. program, Jaclyn graduated Summa Cum Laude with a major in Dance and a minor in Business Administration. A member of the JUNTOS Collective, Jaclyn travelled to Costa Rica, Guatemala, and Nicaragua to participate in dance outreach activities. She has performed the works of Alvin Ailey, Jennifer Archibald, Joshua Beamish, Ronald K. Brown, and Arch Contemporary Ballet. Since joining Spectrum Dance Theater, Jaclyn has performed in many of Donald Byrd’s productions including Drastic Cuts, LOVE, Carmina Burana, Shot, and (Im)pulse, as well as works presented by Alex Crozier, Vincent Michael Lopez, and The Cabiri. Other credits include the Closing Ceremonies of the 2010 Winter Olympics and feature films Center Stage: Turn It Up and Dancing with Shadows. Jaclyn is currently on faculty at The School at Spectrum Dance Theater, and guest teaches, choreographs, and adjudicates throughout the Seattle and Vancouver areas